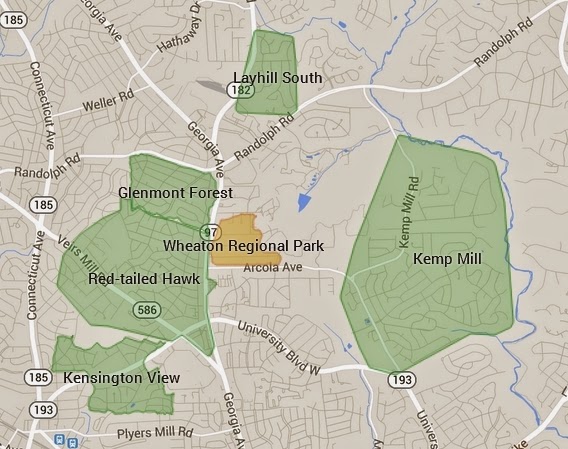 To the right are some of the areas currently covered by groups. There are certainly more areas covered than that but I couldn't find a way to see them all.  Join your group now to see what your neighbors are talking about! 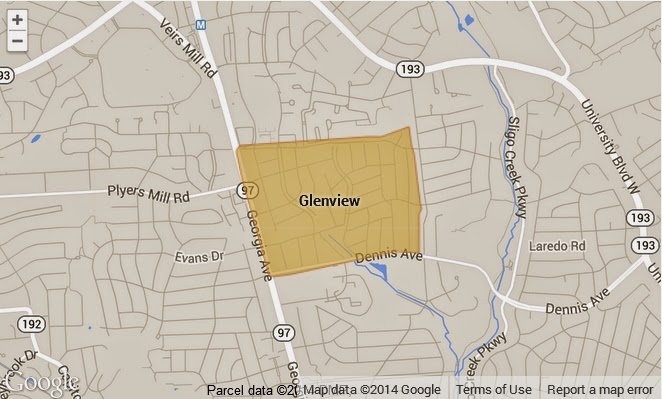 If your area isn't covered, you can create a neighborhood group yourself easily!

I joined recently and am very much enjoying it.  It works by someone setting up a neighborhood on Nextdoor, designating what borders make sense from their perspective, and creating the group.  They invite people to join it and after 10 people inside the boundaries join Nextdoor will mail postcards to the rest of the residences in the hood asking them to join.

Moving to Wheaton from DC, the vibrant neigbhorhood listserv that I left behind was one of the things I missed the most.  Hopefully this will fill that void.

Wheaton Summer Fun Series - Tonight and each Friday in August

The grassy Wheaton Triangle will feature the Lego Movie tonight.  Here's a sign by the Metro station advertizing it. Concerts with live music are 7:00-8:30 PM and the films start at dusk.  Free!  Bring your blanket or lawn chair to sit upon on the grass.

In other news, the construction at Randolph Rd and Georgia Ave (just south of Glenmont metro station) is going strong.  The land in the southwest and southeast corners of the intersection has been bulldozed and is ready for digging!  I hope the construction process goes smoothly and that the resulting intersection is indeed more friendly to all modes of transportation (vehicles, bicycles, and walking), as we have been promised.
Posted by Avocado at 4:11 PM 1 comment:

The film "Led Zeppelin Played Here" is now showing at AFI Silver Spring.  This WaPo movie review is entertaining and makes me want to go see it.  I wonder if the demolitionists are sad yet that they campaigned for the building the be destroyed and won...  Here's info from the AFI website:

1969. Man lands on the moon. Half a million strong at Woodstock. SESAME STREET makes its debut...and Led Zeppelin perform in the gym of the Wheaton Youth Center on Georgia Avenue in front of 50 confused teenagers. Or did they? Filmmaker Jeff Krulik explores an enduring local legend, which doubles as microcosm of what was happening nationwide as the rock concert industry took shape. Featuring interviews with rock writers, musicians and fans, and several who claim they were there witnessing history that night.

Someone Please Open a Yoga Studio in Wheaton

I was shocked upon moving to Wheaton, MD and realizing that there are no yoga studios here!  It makes me feel like the people who live here may be more focused on their kids than on their own health and well being.

There in a dance studio (pictured here) in the Wheaton Triangle and a martial arts studio just off of Georgia Avenue and Blueridge.  There are two yoga studios in Kensington (Ally and Core), but those are not near enough to be convenient for the thousands of people who live in and near Wheaton.

There is a Wheaton Community Recreation Center on Georgia Avenue near the library that doesn't offer yoga either, although they do offer tai chi for adults (also relaxing and good exercise but not the same!).

Hopefully a studio will open in one of the many vacant storefronts around town. The market is here and will just grow with all of the new apartments and luxury condos that are newly open!

Get ready for Heritage Days! Slogan: "Hm! History where you least expect it!" LOL. At various sites around the county Saturday-Sunday, June 28-29, 2014. From a MoCo newsletter:

The last weekend in June, Montgomery Parks joins with historic organizations throughout the county to celebrate Montgomery County Heritage Days with a series of FREE events and activities for all. This two-day, county-wide festival offers visitors an opportunity to sample numerous sites representing the history, culture, and natural beauty of the county. For more information call 301-650-4373.

One of the sites with historic reenactment is inside Wheaton Regional Park.  I checked it out last year and thought the people in period dress did a great job explaining life there in the late 1800s.  It is on the north side of the park behind the Nature Center.  There's a parking lot or you can walk through the park to get there from any point in the surrounding neighborhoods.


Let's get out there and learn about our county's history. Besides Heritage Days weekend, other historical events are listed here at HistoryInTheParks.
Posted by Avocado at 3:24 PM No comments:

Update: the primary election is tomorrow, Tuesday June 23!  Get out there and vote if you haven't already.  I will be voting in the morning before work.

Polls are open 7:00 AM to 8:00 PM and you can look up your polling place here by street address.

This article today about Takoma Park development makes me question my stance on voting for Heather Mizeur and Elrich, but it strengthens my desire to vote for Hans Reimer.

So for Council that would be Reimer and Leventhal for sure. Maybe I'll also vote for Malloy since her staffer was kind enough to read and comment on this post.

If you want to check out the historic Wheaton Rec Center building before it is demolished, take the opportunity to vote there early for the June 24 election!

Early Voting will be June 12-19, 10 AM - 8 PM at the rec center.  I will vote there early to avoid having to figure out how to get to my official polling place, which is far from the metro.

Regarding County Council, 4 at-large council members are up for reelection and there are 2 new challengers for the 4 seats. I won't be voting for Beth Daly.  She is 1 of 2 non-incumbents running and seems to be the anti-public transit/biking/walking/metro-centric growth candidate.  She is described as having views just like Marc Elrich, which makes me wonder about him, and lives way up by Sugarloaf Mountain.  How is that area even part of the same county as Wheaton?  The area is much too large and I don't think someone who lives up there really identifies with the urbanites of Wheaton.  She obviously doesn't share my values according to her answers on this questionnaire on transit issues.

I'm not sure about incumbent Nancy Floreen. In this Post article, Nancy Floreen said she likes suburbia and wants to preserve bedroom communities.  I'd rather have mixed use with people walking to places they need to be.  Bedroom communities are like deserts with nothing you want or need nearby, and recipes for car-dependent obesity if you ask me.  However, the WaPo endorses her and her Twitter feed links to some articles that I support wholeheartedly, like this recent one on why walking in Scandinavia is so much nicer than in the US.  I want to put their principles into practice.  I'm also not sure about challenger Vivian Malloy.  It looks like she lives in Olney, which is a pretty non-urban place, so I'm leaning against voting for her.  The WaPo article didn't mention her at all for some reason.

The other 3 candidates look fine... I like Hans Reimer because he focuses on young people, bicycling and walking-friendly communities.  I like George Leventhal because he wants to bring fresh food into the schools and improve services for homeless people (and he's advertizing on Pandora!).  Marc Elrich lives in Takoma Park and the WaPo likes him because he is the only current member of council who stands up to real estate developers.  I think developers need to really make a case why their new buildings are needed to avoid wasteful development.

Regarding the MoCo state delegate race for District 18, I have met Emily Shetty twice so far (at Taste of Wheaton and in the Wheaton metro station).  She is also the only candidate who lives in Wheaton, so may be a good pick to get more attention to our local issues.  I also met Rick Kessler, but wasn't impressed with him overall -- he gave off the impression of a smooth talking politician.

For governor, I'll probably for Heather Mizeur, even though she is an underdog.  She has a good plan to lower income taxes for people who aren't super high income, plus the other two candidates have things that make me not want to vote for them.  For Brown it is the horrible waste of money on the Maryland health exchanges, of which he was in charge.  For Gansler it is his abuses of police power as attorney general; that stuff will just increase as a person gets more power.


Here's a flier that someone handed me June 9 outside the Silver Spring Metro Station with more info about early voting.  Get out and vote!!

Taste of Wheaton on Sunday, June 8, seems like it was a very successful event! Crowded but it was still possible to move around and listen to the music on two stages, taste the food samples, talk to people running for office in the June 24 election, and watch the kiddos on rides. Here are my photos from the event. Looking forward to it next year already!